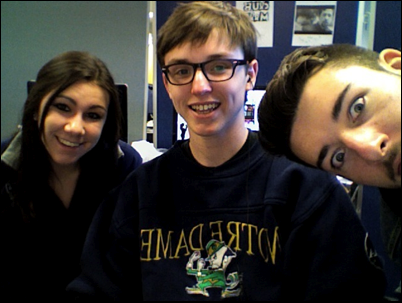 Hey blog readers, Phil here, this week has been a little slow for the doc, we’ve mostly been working with our individual crews, but we still have a ridiculous amount of footage and interviews. Alan has been filming and taking pictures, and I’ve been going through the stockpile of footage we have and naming stuff. I interviewed Mike Demarais a few days ago, which was quite funny. We met with Mr. Hahn a little while ago, and he helped us to start thinking about how we are going to formulate this documentary. The teachers have been a huge help, and Erin, Matt, and Andrea have been working really hard too. Matt has been working really hard on uploading footage and Andrea and Erin have been interviewing tons and tons of people. Well, thanks kids, I’m out.

How goes it people? Back again for some documentary updates. After a long break, you all may expect some major updates, but being preoccupied with our other films and an extensively busy holiday vacation, we at CrabApple did much less than we wished. Friday (12/23), however, was a rather successful day of interviews as Phil, Erin, and Andrea, with guidance from the still amazing Tom DaSilva. Five interviews were done Friday, adding to the three Andrea and I did on Wednesday (12/21). Eight interviews of a possible 200-some alumni. It may seem as if we are not making progress, but after realizing how hard it is to track people down and find a time to interview them, progress is evident (in its own way). Adding to our progress, we have set up a permanent ‘studio’ for filming in Plimpton. I don’t want to be that guy and spoil the surprise, but it’s pretty awesome, that’s all I’ll say. Anyway, it’s first period on the first day of 2012, my mind is still full of Sugar Plums (shout out) from Christmas, I’m still tired from a late night New Year’s Eve, and am positive that half of the things I am saying are nonsense. I’ll leave you with a ‘more to come’ and let you know that today we divided up the years, and will begin our pursuit of Mr. Alan’s extensive Film Festival archive of a mind shortly.

For those diehard film blog followers, you’ve probably noticed that not only am I a Crabapple, I am a Cherry. And this is true. But I am not the only one who is being super fruity with two crews: my fellow directors Erin, Matt, and Phil are from Cranberry, Plum, and Horned Melon respectively.

So why are we doing two movies, you ask? And what is this mystery movie? The answer: Erin, Matt, Phil, and myself (The Fantastic Four) are co-directing the documentary!

This is going to be a whole new experience, very different from a regular movie with a script like our other ones we are directing. And since the documentary this year is on the 10 years of Film Festival (it is the 10th year anniversary this year) we have even more amazing opportunities.

We’re looking forward to meeting and working with past Film Festival alumni, some of whom we are lucky enough to have helping us on the documentary.

The past few weeks for Crabapple have been difficult, because we haven’t really had any time to do that much. What we are working on now is creating interview questions and trying to reach past Film Festival alumni. Some things we’re NOT doing include shot lists and story boards. Such a disappointment.

There’s definitely a lot of pressure for this documentary to be good!!! 10 glorious years of a wonderful program crammed into a half hour? That is going to be far from easy. But I am so excited to get started on this, and I think that it has a lot of potential.

p.s. If you’re wondering about the picture, it is an imaginary Erin, because she refused to take a picture with me.